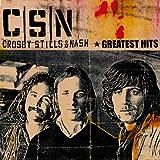 Manufacturer: Atlantic / Rhino
Product Details
Reviews / Greatest Hits
One of the most enduring musical partnerships of our time, Rock 'n' Roll Hall of Famers Crosby, Stills & Nash (CSN) are beloved worldwide for their peerless three-part harmonies, inspired songwriting, and brilliant musicianship. Rightfully claiming a singular place among the artistically and culturally influential acts of the original Woodstock era, CSN has been called "the voice of an entire generation."
When David Crosby, Stephen Stills and Graham Nash created this pop super trio in 1968 after their splits from the Byrds, Buffalo Springfield and The Hollies, respectively, it would have been a pipedream that a hits package released 37 years later would sound as eternal and essential as this one. The 19 songs straddle the four-album, landscape-altered timeframe between 1969’s post-Woodstock debut Crosby, Stills & Nash and 1982’s Daylight Again, which helped inaugurate the MTV era. Unbalanced sequencing--which randomly bounces 12 years ahead and five years back--is rescued by the superb harmonies, unique songwriting and divergent personalities of the three members. With politics and culture always at the forefront, Stills bookends the band’s trademark canon with "Suite: Judy Blue Eyes" and "Southern Cross," Nash incorporates Eastern influences to "Marrakesh Express" and folk timber to "Just a Song Before I Go" and "Teach Your Children," and the ever-capricious Crosby leads the way lyrically with the lingering "Delta" to the Robert Kennedy tribute "Long Time Gone." Sure, the collection is missing any songs by ("Ohio") or contributions from ("Woodstock") the fourth name on the marquee (Neil Young). Here’s hoping that’s for another Greatest Hits. --Scott Holter