The Very Best of Jackson Browne

The Very Best of Jackson Browne 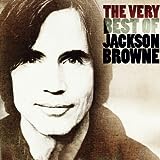 Manufacturer: Elektra / Rhino
Product Details
Reviews / The Very Best of Jackson Browne
Over the past three decades, Jackson Browne has created and voiced many of the most literate and emotionally resonant compositions in popular music and sold more than 15 million albums, including the seven-times platinum Running On Empty and the #1 Hold Out.

This year Browne's artistry is celebrated with his induction into the Rock and Roll Hall of Fame, and with this new retrospective from Rhino. Browne's first-ever double-disc set compiles hits, singles, and choice album cuts from his acclaimed catalog, spotlighting both insightful works of personal introspection and passionately delivered songs of social and political observation. The 2002 recipient of the prestigious John Steinbeck Award (honoring those exemplifying the famed writer's environmental and social ideals), Browne is a mature artist and world citizen whose work shines on this long-awaited collection.

Though Jackson Browne's albums are not plentiful--in a career that stretches 32 years, he's released just over a dozen--they're filled with songs that serve as resilient touchstones for millions who passed through those decades. Originally forging a way for himself as a songwriter, his debut, Saturate Before Using, placed him at the forefront of the southern California rock scene. His contemporaries and compatriots, the Eagles, even took his "Take It Easy" to the top of the charts. Even at his most anthemic, his songs resonate with small details that keep the proceedings human-scaled. The sympathetic accompaniment buoys a voice that's remarkable for its lack of idiosyncrasies. His unmannered singing voice is an essential component in making songs like "These Days," "Fountain of Sorrow," and "Running on Empty" flow with a casual ease that belies the high level of craftsmanship throughout. --David Greenberger