Will the Circle Be Unbroken (30th Anniversary Edition)

Will the Circle Be Unbroken (30th Anniversary Edition) 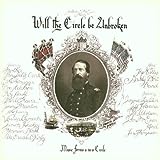 Manufacturer: Capitol Nashville
Product Details
Reviews / Will the Circle Be Unbroken (30th Anniversary Edition)
Two generations of country artists came together 30 years ago, when this epic meeting took place between the Nitty Gritty Dirt Band and Mother Maybelle Carter, Earl Scruggs, Doc Watson, Roy Acuff and LOTS of other legends. This anniversary reissue features their remarkable renditions of Black Mountain Rag; Nine Pound Hammer; Honky Tonkin'; The Precious Jewel; Wabash Cannonball , and 33 more!
In an age when the old-timey soundtrack to O Brother, Where Art Thou? sells 5 million copies, it's hard to imagine how revolutionary Will the Circle Be Unbroken seemed upon its release 30 years ago. The triple album (now rereleased as a two-CD set) paired many of Nashville's venerable country and bluegrass performers (Roy Acuff, Mother Maybelle Carter, Earl Scruggs, Doc Watson, Merle Travis, Jimmy Martin, Vassar Clements) with the Nitty Gritty Dirt Band, or as Acuff called them, "a bunch of long-haired West Coast boys." The idea seemed nearly as foreign as Martians setting down in Tennessee, but the Dirt Band were Colorado hippies steeped in the genre, so there was no disputing the authenticity of the music, or its earthy appeal. Aside from the sheer joy of the performances (listen to Jimmy Martin's "whoop" on "Sunny Side of the Mountain"), there's great fun in hearing Roy Acuff give the boys a lesson in doing a song right the first time (and using the word hell before launching into a religious number). And Mother Maybelle wafts through like a benevolent ghost, or at least a patron saint. One caveat: The boast of four previously unreleased tracks is balderdash, since three are really between-track conversations and rehearsals, and only "Foggy Mountain Breakdown" qualifies as a real song. But that's nitpicking. Buy it. Love it. Wallow in it. O brother, that's country music! --Alanna Nash